Moonlight is the borrowed light of the sun meant to remind us that the sun hasn’t actually gone away – that it shines ever on, albeit from the other side of night. Even the waning and waxing moon can’t help but smile about how faithfully the sun continues to shine, even when it doesn’t fill the sky with light. But on a moonless night, the moon hides from the sun and the path becomes unclear, more shadow than light. More than likely that’s an artificial light, the escaping ambient halo of light above the city. But on that same moonless night, walking a country road, reveals a sky full of distant suns shimmering like diamonds on black velvet — no doubt, our own sun shines with a similar brilliance for some other distant planet.

The moon is a desolate waste, a barren satellite rock caught in earth’s celestial orbit. Having nothing of its own, yet it reflects the glory of the sun, making it the preoccupation of poets and romantics, alike. A serendipitous proximity of cosmic happenstance — even so, it’s evocative beauty remains. How much more are we held as precious to the Father, than this rock hurling through space . . . that in the most unexpected ways we might reflect his glory?

All of creation cries out, proclaiming in wonderment the intricacies of design hidden in plain sight – the hand of God on display. Even the atheist, convinced of the rationality of his disbelief, finds it hard to hide the mark of imago dei he bears – ever pulling on him to understand his life as meaningful, ever drawn to love and beauty and justice . . . as if the universe, for no reason at all, held them as significant. But even these are simple reflections, pointing back to their source, light bouncing off of the surface . . . but what of the light that enters in? 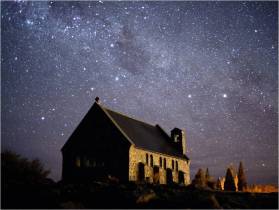 It is the Christian confession, that as believers, we not only bear the image of God, we are also indwelt by the Holy Spirit. So not only do we reflect his glory — we are meant to refract his glory . . . in the same way that light pours through a prism. As God changes us we become the face of God to those who have forgotten what he looks like – it is how we become a tangible instrument of God’s grace to the world. We are not the source of this light, but the light passing through us does take on the color and shape of our personal story . . . of redemption and reconciliation.

So this is what occupies me during this season of expectation, I find myself searching the heavens for a sign, not unlike those wise men of old, who knew the distant light would guide them to something wonderful. It is the mystery of Emmanuel, God with us, entreating us to remember that God enters flesh and blood and changes all of human history. It is Jesus who is the light of the world – a light shown on our countenance, as it moves through us to those in the lost dark of night, those who may be wondering if the Son still shines . . .