There are two very well-known sayings when it comes to lying – ironically, each one tells a particular truth about lying, each revealing something insightful about the human condition. Mark Twain, an American humorist said “A lie can travel halfway around the world before the truth can get its boots on.” And Joseph Goebbels, the infamous NAZI propagandist said “Repeat a lie often enough and it becomes the truth.” So judging from these two quotes, it would seem clear that we are all pretty susceptible to believing socially accepted lies – especially, the type of lies that affirm what we already want to believe.

But the lies that we are the likeliest to accept, are the ones we tell ourselves — and if you think this doesn’t apply to you . . . we may have just identified one of those lies. Truth requires an unimpeachable point of reference, and too often we assume that we are that reference point . . . and that if we were lying to ourselves, we would certainly experience some measure of shame commensurate with such dishonesty. But this assumes that the lies we tell ourselves aren’t shameless in the way they skew our self-perception.

You may have been raised by a parent who was overly critical, scrutinizing every detail and flaw of your life, without a single word of approval or affirmation for what you did right This was a lie told about you – that you likely grew up telling yourself. And this is just one of many examples, of how lies use shame to silence the truth. But there is also a shaming of the true that occurs on a cultural scale, where a group-think ethos attempts to control the cultural narrative – demanding compliance and marginalizing dissent . . . and as it is with all lies — the method of shame employed doesn’t have to be true. 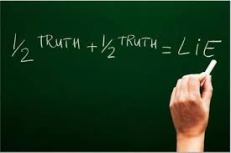 But for the father of lies (Satan), false accusation is the shaming weapon of choice. Because where a false accusation is made, doubt is created – even if there isn’t an ounce of actual evidence supporting the claim. In this way, the damage is done, regardless of the truth. In John 3:19-21 we are told that the light comes into the world by way of sacrificial love. But all that lingers in the dark, hates the light – for the light of truth exposes every lie (20). But whatever is true, lives in the light, and thereby belongs to God (21). So the real test for what is true and what is lie, can only be conducted in the light of God’s love – so come stand shamelessly in the light of that love . . . and allow the lies you tell yourself to fall away.

When in doubt — hold it up to the light.

3 thoughts on “The Shaming of the True”