The couple of years before I met and married my wife of 35 years, are the years I fondly refer to as my vagabond days. Given that I was never one for defining myself in terms of possessions — I never really acquired many of them to speak of . . . of which the ancillary benefit was, I didn’t really require a fixed location for keeping all of that extraneous stuff I didn’t really need. So I ended up living between four or five different cities, working odd jobs, while refining my skills as a singer/ songwriter. And if anyone asked me back in those days, what it was that I did for a living – I would say without hesitation “Why yes, I’m a vagabond poet . . . and what is it that you do?”

This behavior was considered just as eccentric and esoteric to my friends back then as it is to my friends now. But to their credit, they smile and accept me for the unusual friend that I am. Perhaps, because they themselves, on some level, are drawn to that side door of reality, that I seem to be able to step through from time to time – beyond the semantics of what often defines normative behavior. As I have long contended – normal is the word we use to describe what happens when we’ve long forgotten why we keep doing the same thing.

I suppose that’s why there’s a restlessness simmering beneath the veneer of our conformity, reminding us that something essential to our understanding of ourselves has been obscured – while we allow things of lesser value to preoccupy us. Even our faith practices tend to lose their luster in the presence of the impermanent things that captivate our daily desires – until even those faith practices have been brought into submission, having conformed to some new iteration of normalcy we’ve contrived.

When the Old Testament prophets spoke, it was with a wildly unconstrained and nakedly provocative voice, well outside of the conventional thinking of the cultural and religious expectations of their day. Their words were both terrifying and beautiful, filled with an urgency for remembering how something valuable was lost back in the garden. So like an echo from the past barreling its way through the present, on its way to an explanation of what’s to come — their words, imbued with God’s authority, transcend time. But today we reductively homogenize their voices in order to suit our own religious narrative de jour. 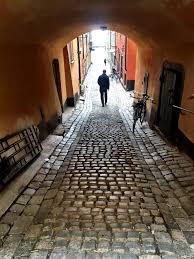 Then Jesus appears, entering a world of established cultural norms and religious conformity, where he begins to disassemble the conventional paradigm of his day. The outsiders were invited in, while those who thought they were already in, were invited to rethink what that means . . . what it means to be in a right relationship with God. For this is the very Kingdom of God that he offers – a relationship inaugurated by his life and defined by his death, burial, and resurrection.

I guess this is why I like to think of Jesus as also being a vagabond poet — as a prophet declaring a kingdom come, while simultaneously having no place to lay his head (Luke 9:58); as one who speaks directly to the heart of the matter regardless of cultural and religious conventions — while simultaneously spending time with those conspicuously on the fringes of acceptable society . . . including, provocatively elevating the social status of women, and making a child’s lack of pretense, our primary example.

He says both the hard thing and the loving thing, speaking in parables, winnowing away the passively curious, from those desperate enough to be forever changed by his life giving words. Many have attempted to co-opt Jesus, with an expectation of somehow conforming him to their political or religious agendas — but such hubris can only portend destruction . . . for only the humble can fully appreciate what it means to be conformed to his image, to walk in his way, and proclaim his kingdom.

I believe this song written and performed by my brother
Jeff exemplifies the vagabond poet perspective.

3 thoughts on “The Vagabond Poet”